No Moharimet classrooms on the ballot

On Wednesday January 8 (agenda, video) the administration proposed a new warrant article seeking to raise $325,000 to build two new Moharimet classrooms.  It was presented as part of the warrant at the Public Hearing January 14th (video).  On January 15th (agenda, video), the Oyster River School Board voted 6 to 1 to remove the proposed article from the ballot.  Member Turnbull was the sole vote in favor of presenting the question to district voters on election day March 11, 2014.

Here is the article that was removed:

ARTICLE 5: Shall the District vote to approve the construction of two additional classrooms for the Moharimet School at a cost not to exceed $325,000 payable over a term of 5 years with an annual appropriation of $65,000, and further to raise and appropriate $65,000 for the first year's payment.  In each of the following 4 years the appropriation of $65,000 will be contained in the operating budget and the default budget.  This is a special warrant article 3/5th majority vote required for passage.

Note that this is in addition to articles 4 and 6, which collectively ask for approval for $600,000 in spending on the Moharimet cafeteria and gym modifications (estimate $560,000).

The plan was to construct a 900 square foot Art room and a 600 square foot Occupational Therapy room.  The rooms would be adjacent to the gym, in the grassy space behind the gym (away from the parking lot).  The hope was to realize some savings by combining the gym/cafeteria and classroom projects.  The room that had been dedicated to OT and other special education at Moharimet became regular classroom space in response to the overcrowding surprise this past summer.

To the best of my knowledge, additional Moharimet classrooms are not part of the $4 million capital improvement plan from a year or two ago that I can no longer find online.  (For that matter neither is a Moharimet cafeteria, though it is mentioned.) 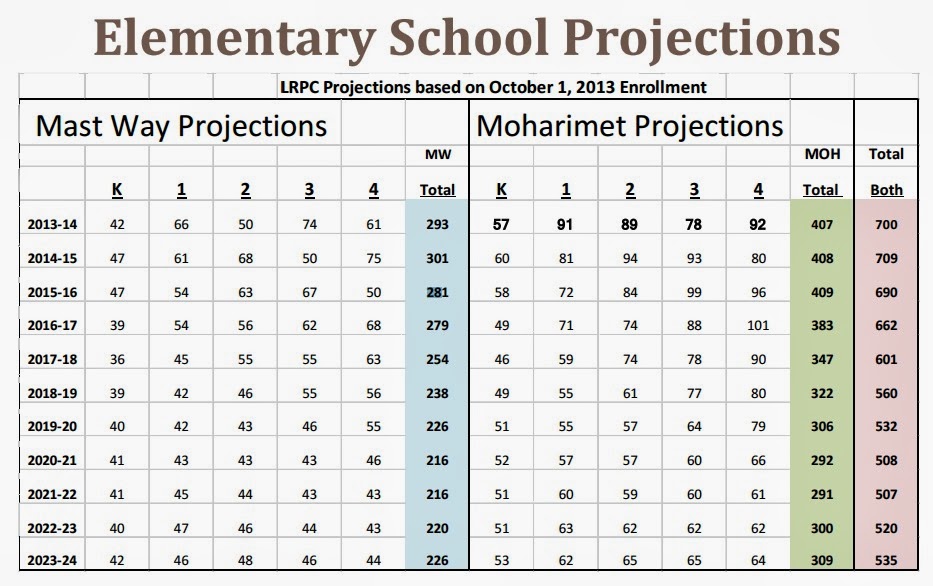 Why spend $325K (0.8% of the budget) to add space to a school where enrollment is forecasted to decrease?  According to the superintendent, the new classroom space, scheduled for completion in October or November 2014, would be used to alleviate the overcrowding expected to persist for several years at Moharimet.  Eventually the extra space could be used for full day K or as space for fifth grade in the elementary schools.

Do we really need two more?  I'm guessing that had the question been offered to voters, it would have fallen short of the three-fifths needed to pass.   Not that it matters now, but I'd have thought it would have had more of a chance of passing as a single year appropriation where I think it would only need a simple majority.

Chairman Barth's suggestion to get two more portables (temporary classrooms), while greeted with hoots and laughter (video), makes much more sense than spending $325K for space that's not really needed in the long term.

A Moharimet parent is trying to get an SRO (a police officer) in Moharimet.  Currently the district employs one SRO, who spends 75% of their time at the high school and 25% at the middle school.

Moharimet currently has a Madbury police officer who is often at the school, but is not paid by the district and is not officially an SRO.   Apparently Lee Police declined to provide an SRO for Mast Way, and the superintendent thought having an SRO at only one elementary school would not be equitable.
It's an emotional issue.  There was a lot of rhetoric about Newtown and "what are you going to say when my child is murdered?" which to me is a pretty good sign rationality is taking a back seat.   Member Turnbull proposed a $50,000 budget addition for SROs in both elementary schools.  That ended up not going anywhere at the meeting because it's apparently against the law to add budget items after the public budget hearing.

I did some quick searches and found a few cases where an SRO heroically ended or averted a school shooting (Arapahoe, Sullivan, Socastee, perhaps Carver and Sleepy Hill).  Columbine famously had an SRO who failed to stop the event.   An SRO shot and killed an autistic student that was stabbing him (Carolina Forest).  There are a few cases of SROs accidentally firing their weapon at school (Highland Central, York Comprehensive), tasering to stop a student fight, and leaving a gun in a student bathroom. Here's an SRO accused of fondling a student.

Member Turnbull said she would bring up the appropriation at the Deliberative Session, when it could be added to the budget by a majority of district voters present.

My main objection is that while there doesn't seem to be any particular evidence that having police in schools makes students safer, there does seem to be pretty good evidence that having police in school tends to escalate student behavior problems into criminal matters.  I plan to vote NO, but given the emotion surrounding the issue, I bet it passes.

The ORCSD is an SB 2 form of government, meaning that the traditional town meeting is broken up into two parts.   The first part is the Deliberative Session, which is is like a town meeting where folks can attempt to amend the ballot questions.   Then there's a regular election day on the second Tuesday in March where the voters may approve the amended questions.

The Deliberative Session is February 5th.  It's a real election.  It's usually 7pm in the ORHS auditorium, but I haven't seen that officially yet.  A majority of voters at the Deliberative Session can amend the existing warrant articles (also known as the ballot questions).  Unlike most elections in New Hampshire, there is no same-day registration.  You must already be registered to vote in one of the three towns to be given a voting card at the DS.

The law restricts the possible amendments.  Typically an amendment will change the amount of money to be raised and appropriated by an article.  It is not permissible to amend wording required by law or to change a warrant article from its original purpose.  (Though I'm pretty sure zeroing out the funding is permissible, which presumably changes the purpose.)   The default budget (the budget we likely get if the main budget article fails to pass) cannot be amended.

The Deliberative Session is an incredible part of New Hampshire democracy where a single voter who shows up wields enormous influence.  Last year 120 voters showed up, so it would have only taken 60 votes to modify the budget.   That (barely) didn't happen last year, because a sufficient number of voters present supported the articles as approved by the board.  So please mark February 5 on your calendar and come by the DS -- your vote really counts.

After the DS the articles still have to be approved by the voters on election day March 11 to take effect.  Typically two or three thousand people vote in our March election.

I believe it only takes 25 signatures for citizens to get a warrant article onto the ballot.  For the current year, the deadline to get those petitions in has already passed.

Besides SROs, the board wants to amend the Moharimet Cafeteria article to say $600,000 instead of $500,000.  This better reflects the estimated construction cost of $560,000.  The worry is that if this article passes and the article transferring around $100,000 from the Capital fund to the general fund fails, there won't be enough money or authority to build the new cafeteria.  To me this is an uncontroversial "technical" amendment, designed to correct a problem with the wording, so I hope it passes easily.

Voters can propose amendments like adding $50,000 to operating fund for SROs, but it's only the monetary amount that is amended.  Even if the amended question passes in March there's no requirement that the district spend the money as intended.  The money gets added to the budget and the board gets to decide what to do with it.   It is likely though not guaranteed the board will do what the majority in the DS wanted.

As a result of a settlement reached with the district, David Taylor withdrew his lawsuit.  Congratulations to Mr. Taylor, the board and the administration on this amicable outcome.  The board agreed to reimburse David for his court costs and to toughen up policies related to Right-To-Know compliance.  Member Turnbull read a statement conceding how her email might be construed as violating RTK.

David was very helpful to the board at the meeting, pointing out how the attempts to add items after the budget hearing are illegal.   Let's hope this is the last Taylor lawsuit against ORCSD.

In other news, there was a tedious discussion about adding back a 0.4 FTE language teacher at the high school.  That's a part time teacher that teaches 40% the load of a full time teacher, which I think means 10 periods a week.  The position was shed as one of the recommended cuts from Principal Todd.  The cut apparently brings world language in accordance with the IIB class size guideline (minimum 18), which was one of this year's budget goals.    The issue now seems to be that the cut increases the likelihood some students won't always get the class they wanted and that will prevent them from ever taking a 5-level or AP language course.  In the end nothing was done, not least of all because they're not allowed to add to the budget after the budget hearing.  Presumably this could come up at the Deliberative Session.  See you there Feb 5.