I haven't posted since the snowy election day.  I have been going to the board meetings, so I thought a recap was in order.

On July 29 new ORHS graduate Juliet "Jay" Rasmussen passed away from an unexpected pulmonary embolism. I know this shocked my daughter as I'm sure it shocked many others. Friends may call Monday, August 6, 2018, 10 a.m. to 12 p.m., Purdy Memorial Chapel, 2 Concord Road (Rt. 4), Lee, N.H., memorial service at noon. (Fosters)

My deepest condolences go out to the families and friends of both students.

Coop Football is on for the fall

Our cooperative football team with Portsmouth High got an expedited approval from the NHIAA.  Initial reports indicate fourteen Oyster River students are interested in playing football at Portsmouth High School starting this fall.  No one will be cut; all who wish to play may.

The involvement of our district has been minimized.  All practices and home games are in Portsmouth.  Students are responsible for their own transportation and fees.  Despite this distancing Athletic Director Lathrop seemed certain that individual financial barriers could be overcome through available private support in a way to enable near equal access to all students interested in playing.

The ORMS Facility Committee released their final report which recommends building a new middle school.   The report was endorsed by the school board at the last meeting.  (I can't find a better link; the report starts about page 29 in these minutes.)

The report recommends two sites: the existing middle school site or the Goss Industries site.  The latter is an industrial park just northeast of the Route 4 / Route 155A intersection. It used to hold the UNH Interoperability Laboratory, but that's been moved to Madbury Rd near the middle school.  The main benefit of Goss is the sixty acre size including large parking lots. UNH is interested in a joint venture but no one's even attempted to inquire about purchasing the property, so this is a strawman.

The existing middle school site is by far the most likely choice.  My impression is most folks think despite the occasional drunken Cinco de Mayo, the central location of the middle school near the high school, downtown Durham, the library and UNH is preferable.

The exact location for the new building is undetermined.  The existing building would be left in place during construction.  The board gave approval to engage an architect to continue the planning process.

Despite some effort the whole new middle school issue hasn't really registered with the public yet. The superintendent will probably stretch this part out to get the public engaged, nominally to make this practically already decided decision on the site.

Construction is in full swing, adding new classrooms and a music room in the rear, and a new secure entryway in the front.  The price tag was over $1M, with federal money paying for the entryway work and your local tax dollars the rest.  Completion isn't expected until late October unfortunately.

The district passed a new policy which bans student use of personal devices in grades K through 8.  In tandem, the district accelerated plans to move to a one-to-one computer model, in which each middle school student is assigned their own device owned by the district.  Due to a big effort by IT Director Oldstad and the entire IT Department, the program will be geared up and ready to roll out in the fall.

The controversial exception that allowed individual teachers to override the ban was removed as it is hoped the one-to-one model obviates the need for it.  (Policy, Procedure)

China Trip is On

Forty high school students will travel to China in April 2019, a trip similar to the nineteen students that went in 2017.  The board approved that trip less than a month before the students left; this time we have a leisurely year to prepare. I believe the opportunity is restricted to members of the studio orchestra but I'm not certain.

In May the High School Psychologist Dr. Ryan Long and the Counseling department announced a new district-wide social and emotional learning program.  The SEL program takes a three tiered approach, with broad information presented to all students and more targeted sessions with some small groups and individual students.  (Presentation starts page 25 in these minutes.)

At least the school board acknowledged that she did; I can't find news or a press release.  There was a later board meeting that reported Doris was honored with the president's award in Las Vegas.

Congratulations Doris and everyone associated with our award winning food service.  The summer free lunch program goes on for the duration of Summer REACH, one more week I think.  Kids eat free, adults have to pay.

The agreement between the district and outside organizations using school facilities has been revised.  The changes are the result of a lawsuit where the district is being sued because one of the organizations using our facility did not comply with the ADA at a level the school would because they apparently aren't required to.  The revised use agreement changes that, at least when they use our facilities.  It also places increased insurance requirements on organizations.

Competencies Get a Fourth Level: Exemplary

[CORRECTION 8/6/18: I said Exceeds as the name before, but I see in these minutes the correct term is Exemplary.  Sorry about that.]

The Middle School has been leading the district's efforts toward competency-based reporting, with competencies replacing the usual letter grades. Each subject is divided into four to eight broad competencies, which are discrete units to be learned. (These may be subdivided.)  For several years, and nearly schoolwide last year, ORMS has been using a three level system for grading each competency:  Beginning, Progressing and Meets.  This coming year they are adding Exemplary, presumably because mommy and daddy are complaining that their little genius is more than merely competent.  This idea met resistance before because it was difficult to define what exactly exemplary competency means.  It's not even grammatically similar to the other ones. Maybe they'll just know it when they see it.  I guess we'll find out.

The ORHS results of the 2017 YRBS are in, which always makes for some scary reading.  Again I can't seem to find a link other than a discussion in a school board meeting.  I'll just screenshot some slides; click to enlarge. 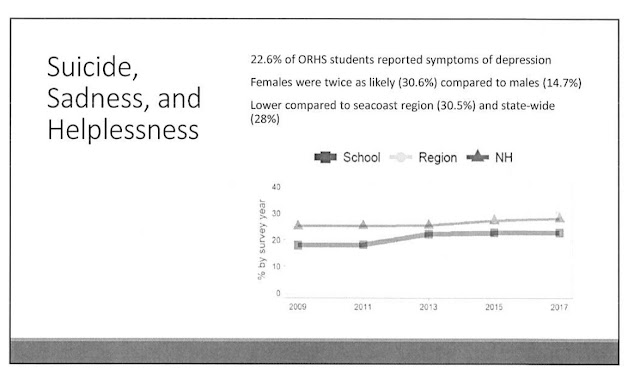 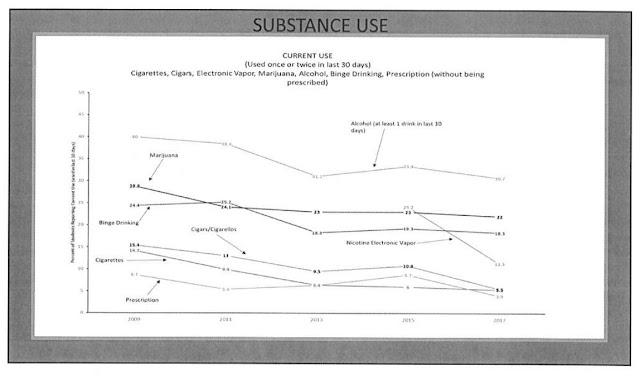 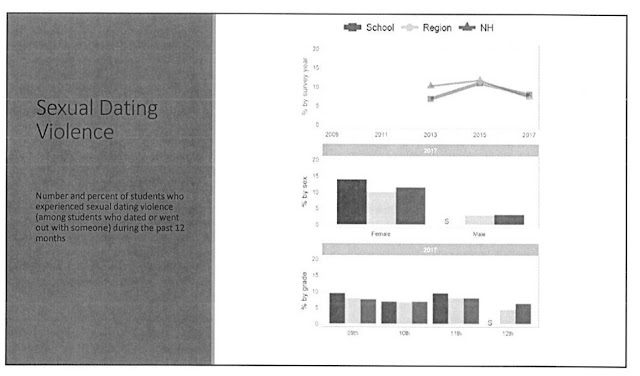