Election Day is tomorrow as I write this so that's what I'll focus on.  In addition to the ORCSD ballot, your town is having municipal elections; click for sample ballots (Durham, Lee, Madbury).

This is my annual guide to the March 12, 2019 Oyster River School District election. The ORCSD ballot is relatively noncontroversial this year. I'll be voting for all the listed candidates and YES on the questions.  Hopefully unlike the last two years there will be no weather incidents that disrupt the voting.

If you're a US citizen over 18 who lives in Lee, Madbury or Durham, you can just show up on Tuesday at your town's polling place and vote. Like almost all elections in New Hampshire, same day registration is available. So even if you've never voted or registered to vote in New Hampshire before, you can vote Tuesday. It's easier if everyone brings a state photo ID and if new registrants also bring proof of address (a utility bill), but under New Hampshire's voter ID law you can vote even if you don't bring those by signing a form at the polls.


Your polling place and voting times depend on where you live:

As always, voters in each town are given identical school district ballots. Let's briefly go through the ballot questions, also known as the warrant articles.  For more information, please see my last post and the recently released SAU 5 Annual Report 2019. 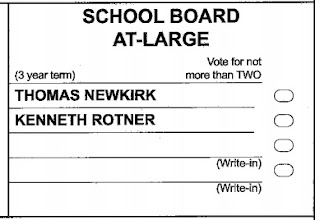 Article 2 elects the school board members.  This year we have two candidates for the two at-large seats, so they're both going to win. They are existing board chair Tom Newkirk and board member Dr. Kenny Rotner, so no changes there.  Tom has served on the board since 2012 and Kenny since 2013.

I don't think the teachers' guild even bothered with their usual questionnaire this year.  I saw that Tom put out his signs but I didn't see any Kenny signs.  I can't decide who's the wise one on this.

I went to Candidates' Night a few weeks ago.  Besides the district clerk Bill Leslie and the candidates, four members of the public showed up.  Thanks to the Mast Way PTO for refreshments as always.  No one recorded the meeting, which I think led to a more frank discussion. We covered the new middle school and its financial impact as well as the district's mental health programs, among many topics.

Congratulations Tom and Kenny.  You're sentenced to three more years of hard labor.

Article 3 asks the voters if the district can spend $47.4 million! That's a lot of dollars.

It doesn't say here, but after the state money and other revenue is accounted for, the amount asked of the taxpayers of the cooperative went from $40.2M to $41.6M, an increase of 3.5%.   Because Lee's property values went up 10% (as estimated by the state) in 2017, compared to 5% for the other towns, the cooperative's apportionment formula shifted more of the bill to Lee.  It will likely even out next year, but this year Lee's Local School Tax line is estimated to increase 10%, compared to 3.5% for Durham and a decrease for Madbury.

I don't think we in Lee should be mad at the school district for this increase, but I'm pretty sure much of the rest of the populace doesn't share my view.  Should the default budget be enacted through a NO vote on this article, the $550K saved will lower the Local School Tax about 1.5% but Lee will still get a big increase.

The budget includes $800K to develop plans for the new Middle School, 2 points of the 3.5 point increase.  I thought this was a shockingly large amount given that the voters don't get to weigh in until next March.

Article 4 asks the voters to approve the contract with ORESPA, the Oyster River Educational Support Personnel Association.  ORESPA is the collective bargaining unit for the Secretaries and Custodians.  The contract is for a 2.5% annual raise, slightly above the recent inflation rate.

That's it for the ballot.  See everybody at the polls tomorrow.