Foster's kindly ran my letter to the editor today. It was a response to the 4/5/2013 letter from Cal Jarvis entitled "Hiking Costs Versus Fumbling Spending."  It's an extension of a pretty good debate Cal and I have been having about tuition students in this post.

Though I don't always agree with Cal, I do want to thank him for his attention.  Ever since my first post, Cal has been there to push back on what I said.  He is my most prolific commenter.  His contributions have definitely made this blog more interesting and relevant.   Thanks for taking me seriously, Cal.  I hope you keep your comments coming.

Cal, with your permission I'll include your letter right here. 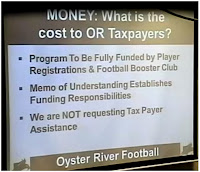 Here's my response.  Thanks to Foster's for running it and for the free editing advice.  The editor encouraged me to take out all the objectionable terms like "we're FORKed" and "they FORKed us over."   That's probably for the best.

Foster's also edited my quote "NOT requesting Tax Payer Assistance" that I should have tagged "[their emphasis]" or some such.  I've restored the quote to the way it was originally presented at the March 6 school board meeting.

To the editor: Calvin Jarvis used to want lower taxes in Oyster River. But his F.O.R.K. proposals have us taxpayers FORKing out big money. (Letters, 4/5/2013).

Tuition students are a fantastic deal for us, but Mr. Jarvis says no. We could squeeze in one more student for the cost of some supplies. For 200 we’d need to hire about 10 people. Conservatively estimating the cost as $5,000 per student, each $12,000 in tuition means $7,000 that we district taxpayers don’t have to FORK up.

Mr. Jarvis is against the Sustainability Committee, whose energy audit led to $90,000 in fuel savings. Annually! He criticizes the board for not addressing staffing, though their incentive led to 17 retirements, only four of whom will be replaced. We save half a million next year when the incentives are paid and a million each subsequent year.

He wants football, presented as a program “NOT requesting Tax Payer Assistance.”  But they spoke with FORKed tongue. The superintendent said the athletic director “easily identified another $10,000” in annual costs not in the proposed budget. The boosters’ proposed contract allows them to end support immediately anytime, but we pay startup costs if we even consider terminating. There’s no external funding for trainers, support staff, marching band, cheerleaders and Title IX girls sports. “Full” external funding surely won’t continue forever. We taxpayers will have to FORK it over.

The previous Republican state legislature shifted $500,000 a year in retirement costs to the district. They cut an additional $400,000 a year in school aid. Now this money comes from our local property taxes instead of room taxes paid by visitors and dividend taxes paid by the wealthy. I don’t know if Mr. Jarvis supported this FORK in the back.

Board members pay taxes too. I know each is acutely aware of the burden high taxes place on all of us, especially the least well-off. Energy savings, retirement incentives and tuition students are all ways the board is trying to bring taxes down. So let’s all commend the board for what they’ve done for us taxpayers, encourage them to do more and stick a FORK in F.O.R.K.

Cal’s mistaken about at least one more thing. F.O.R.E. didn’t endorse anyone in the last two elections. I did, at ORCSDcleanslate.org.


Posted by ORCSDcleanslate at Thursday, April 11, 2013