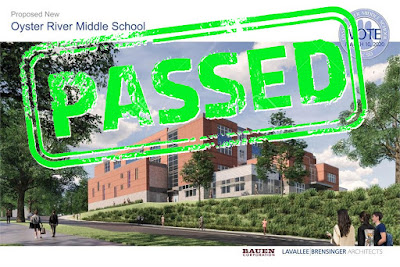 The middle school passed on the first try with 76% voting YES, greatly exceeding the required 60%.  I had been pessimistic -- I need to remember that facebook isn't the actual world.  Congratulations to everyone who worked so hard to persuade the voters.

Otherwise there were no surprises.  Congratulations to Denise Day and Michael Williams on their reelection to the board, Denise for her third three year term.

462 folks (15%) are so ornery or so clueless they voted to raise their own taxes 1.5% by voting NO on the school district budget.  Of course YES won so there is no consequence to their vote.

Here are the unofficial ORCSD election results, thanks to Todd Selig (percentages are from me).

ARTICLE 2:   School Board at Large (Vote for not more than two)

Shall the District raise and appropriate as an operating budget, totaling $47,538,867...

I've compiled this from the election reports I've written since I started paying attention in 2012.  The '>' means I don't have a turnout number reported for that year so I used the maximum number of voters of any article.  There's usually around a 2% undervote so a better estimate would be to add 2% to those numbers.