This is my very biased yet oddly informative voting guide to the upcoming ORCSD election.  If you just want to see the unadulterated ballot, skip to the end.

Election Day is this Tuesday, March 13th, 2012.   Vote at your regular polling place.   Depending on which town you live in, that's the Lee Public Safety Complex, Madbury Town Hall, or Oyster River High School in Durham.   Lee has a sign outside that says the polls are open 7am - 7pm; I'm not sure about the other towns. If you're not already registered, you can register at the polls on election day.   To register, bring proof of age (driver's license).   If you don't also bring proof of citizenship (birth certificate) and proof of address (utility bill) they'll ask you to sign something swearing you've told the truth about these.    I think it's still the case that voters who are already registered don't even need ID.   Here's FORE's voter information.

Voters in Madbury, Lee, and Durham will all see identical school district questions, including the four races for board seats.   Everyone gets to vote for all four seats.   I want to be clear: Lee and Durham voters vote for the Madbury seat on the board too.   For example, everyone in all three towns can vote for all four of Tom Newkirk (at large), Ed Charle (Madbury), Al Howland (Durham), and Maria Barth (Lee) (Remember their first initials spell TEAM.)  Or they can vote for any or all of their opponents.  When it comes to school district questions, including seats, each vote from any voter in the district always counts equally.   Some people complain that this gives Durham, with the largest population, more influence.  But it comes down to every voter in the district being treated equally.   My understanding is that this rule for cooperative school districts was decided by the New Hampshire Supreme Court.

Let's go through the ballot:

Article 1 elects the moderator, and there's only one person running.   Vote for him, write yourself in, I don't care.

Article 2 elects the school board members, and there are four races.   My recommendation is that you vote for the TEAM - Tom, Ed, Al, and Maria.   On this ballot the order is Tom, Al, Maria, Ed -- TAME !   Al  Howland's running unopposed but there's a rumor of a write-in campaign, so please fill in his oval.    If you don't want to take my word for who to vote for, here's a questionnaire the candidates all filled out.  Ed (whose full name is Dr. Edwin Charlé) has learned a lot since he's filled out this questionnaire, as you can tell from the interview on his website.

Article 3 is the ORPaSS contract  (paraprofessionals and support staff).  I would say that ORPaSS gave the district a good deal and I'm voting YES.    Thanks, ORPaSS.   At the March 7 meeting, the board clarified that the 2014-2015 number of $52,718 is the year-on-year increase, so represents an $86,258 increase above current levels.  I just spent a few minutes looking in the budget for how much in total we spend on paraprofessionals and support staff but I didn't find it,  though I seem to remember it's there.     At the last board meeting somebody suggested putting the total on the poster, but nobody knew offhand how much it was.  I didn't find the new contract, though the one from three years ago has the current pay rates.    Be nice to these people -- they work hard for our kids for not alot of money.

Article 4 is the ORBDA contract (bus drivers).   They too gave us a good deal, so I'm voting YES to take it.    Thanks, ORBDA.  I'm glad the board didn't outsource transportation.  Stephanie in a comment below says she checked and the real ballot contains an oval to fill in for for YES.

Article 5 raises $47,000 for Sustainability Committee initiatives, notably energy audits.  I'm voting YES.   If the energy audits of the other schools uncover a fraction of the problems that the one in the high school did, this money will pay for itself many times over.  For a board that's doing victory laps for finding out the high school heat is broken, why are they asking the voters whether to do energy audits for the other schools too?   They could just pay for them out of the general fund but they don't want to look like spenders, even when spending money would save money, not even just in the long run, but this budget year.  For the high school problems, spending $40,000 now saves around $70,000 in fuel annually.  Yet you'll note that, unlike many of the others, this article does not say "The school board recommends this appropriation." It was Mr. Kach, who touts as a major accomplishment "the completion of the district’s facilities report and an energy audit on the ORHS," who suggested the board's recommendation be omitted.

Article 6 is a vote to sustain the Sustainability Committee another year.  I'm voting YES.

Article 7 is the vote to raise $38 million to pay for schools.  The important thing to understand about this question is that your vote affects only one quarter of one percent of the budget.  If YES wins, we raise about $104,000 more than if NO wins.  Either way we're raising north of $38 million. I'm voting YES and hoping the new board uses the extra money to reinstate the High School Assistant Principal, who'll we'll need if we want to carry out the plan for 100 more tuition students over the next four years resulting in a direct savings to the taxpayers of $1 million annually.   Inaccurately, this article states "the School Board recommends this appropriation" when the default budget (what we get if "NO" wins) is closer to the school board approved budget -- the voters at the deliberative session added around $156,000 to the school board's budget to arrive at the budget on this ballot.   There was some loose talk in the paper that this addition is why taxes are going up, but the school tax was going up about 3% even before this addition of 0.4%


I've been told that each individual town counts their own ballots, and brings the result to the high school where the Durham ballots are counted.  The results are announced at the high school, usually around 9pm on election day.  I'll post them as soon as I get them. 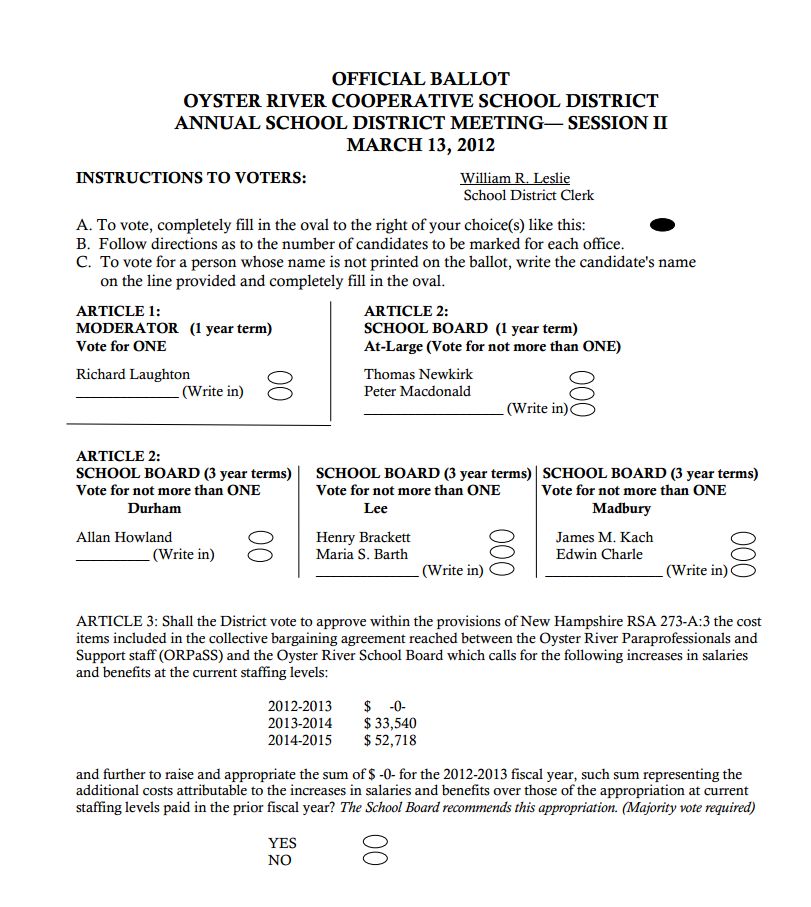 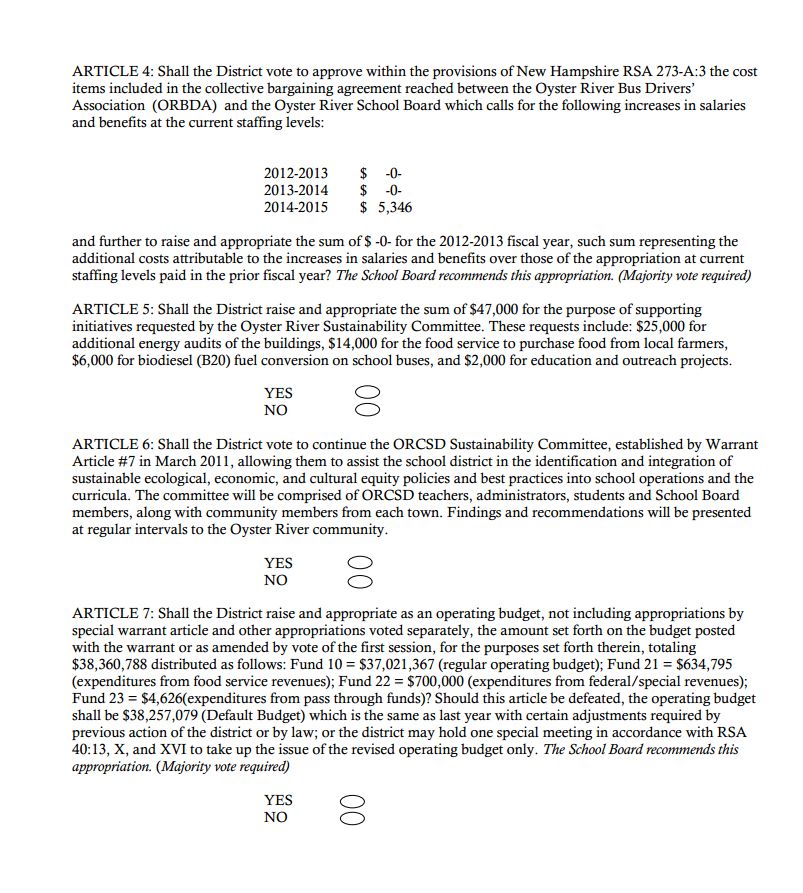 Posted by ORCSDcleanslate at Thursday, March 08, 2012