Guide to the February 5, 2014 Deliberative Session

The Deliberative Session is tomorrow, Wednesday February 5, 7pm at the ORHS auditorium.  Since it looks like there's a storm coming it's important to note the snow date is Thursday, February 6, same time and place.  I've been informed that the lawyer and moderator are not available on the snow date, so the deliberative session is likely to happen on Wednesday, even if the weather is iffy.

As I've explained before, the Deliberative Session is a real election in which voters present get to amend the warrant articles (ballot questions) which will be voted on by the full district Tuesday, March 11.    I expect amendments proposed to add SROs (police) to the elementary schools and to add back the cut 0.4 FTE World Language teacher.  Last year only around 120 people showed up, so each vote counts a lot.

FORE just explained the nuts and bolts of the DS, so I won't repeat that here.  Here is the warrant from the minutes of the last school board meeting.  I think a slightly modified warrant is slated to be the starting point for the Deliberative Session (click to enlarge). 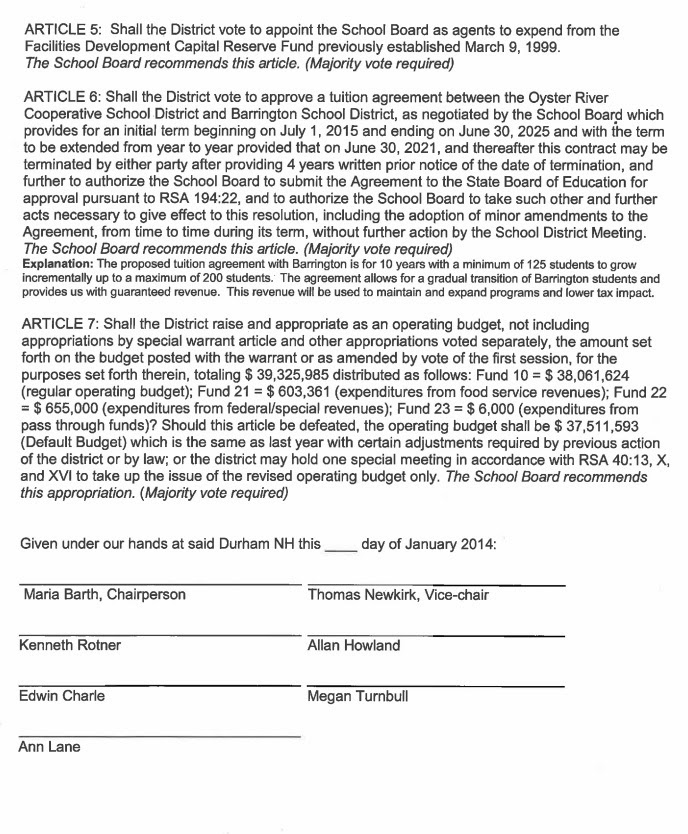 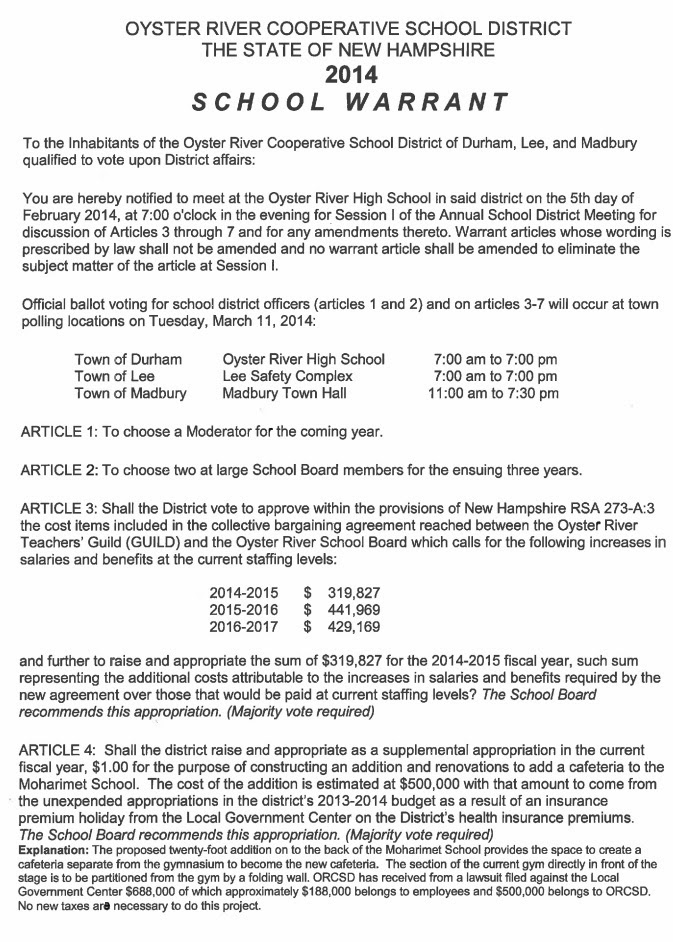 The DS warrant is slightly changed from the one presented at the January 14 budget hearing.  I personally don't think the board should have modified the warrant after presenting it to the public.  Instead, they should have saved any modification needed for the deliberative session.

I've explained the warrant before, and I will again as we get closer to election day.  A quick summary: Article 1 elects the moderator, who is running unopposed.  Article 2 elects two at-large school board members (three people have declared, so it's a real race again this year.)  Article 3 approves the contract negotiated with the teachers -- I don't think the public can amend that one as it reflects a previously negotiated deal.

Article 4 is the confusing one, appropriating one dollar to build a Moharimet Cafeteria.  The one dollar is really permission to go ahead. The renovation is expected to cost $560,000 of which $500,000 will come from the LGC fraud settlement.  Article 5 authorizes the approximately $100,000 Capital Reserve Fund to be transferred to the general fund, to fund the balance of the cafeteria as well as Middle School HVAC upgrades.  The two articles are written in the confusing way they are in case one passes and the other fails.  I suspect the board may ask to amend these to articles to add explanations which clarify things.

Article 6 is the ratification of the tuition agreement with Barrington.  It represents a negotiated contract which has to be approved by the voters of both districts (ORCSD & Barrington), so I do not believe it can be amended at the deliberative session.

The buzz is that there are likely to be two amendments to article 7 proposed.

Amendment SRO:  At the January 15th board meeting Madbury parent Lindsay Rains and board member Megan Turnbull discussed adding $50,000 to the budget for the purpose of hiring School Resource Officers (policemen) for Moharimet and Mast Way.    I personally am against this amendment, as there appear to be no evidence that it makes kids safer, but there is evidence that it increases the criminalization of student misbehavior.  It also is insufficient, as ORMS and ORHS currently share an SRO, so by this logic we would need 3 for $75,000.

Amendment LANG: Last December, the administration and board cut 0.4 FTE (i.e. a part time) language teacher from the budget, for a savings for $31,517.   The justification was that this brought the language department up to compliance with the board class size policy of 18 to 22.   Former board member Ann Wright wrote the following on her facebook page;

I hope everyone comes to the ORCSD Deliberative Session and votes to KEEP Wendy Gibson (yes, the .4 Spanish teacher has a name!). She is an amazing teacher who has never been afraid to email or CALL me when she thought my son was having problems and even when he was doing well. We cannot lose teachers like her. Read this, and understand the importance of teachers who CARE!

So I'm guessing Ann will propose adding $31,517 to the budget for a 0.4 FTE world language teacher.  I'm going to vote NO and support the board and administration's attempt to live up to their stated policy.  There was a long discussion of the issue on January 15.

See you all there tomorrow, weather permitting.