I just got an AlertNow call saying that due to the weather the Deliberative Session has been postponed to Friday, February 7, 7pm ORHS Auditorium.

This gives you a couple of more days to read my guide to the DS.

The announcement is exasperating, as the snow date Thursday February 6 has been on the district's calendar for a while. 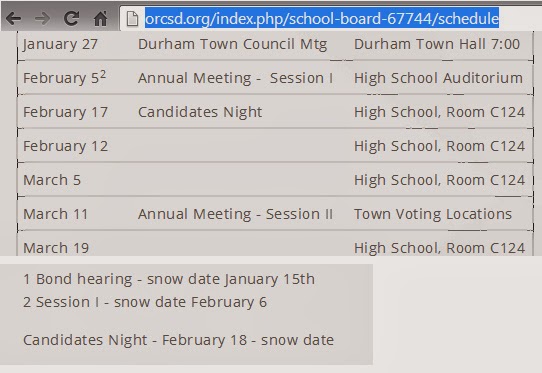 This annoys me as yet another example of the district's prepared response to a foreseeable problem abandoned once the problem actually occurs.

Last April, when snow days forced a one week delay in graduation to June 14, the resultant outcry led the board to petition the New Hampshire Secretary of Education for permission to move graduation back to the original date June 7.  Even though the permission was granted, the board and administration came to their senses and had graduation June 14, the date dictated by the rules in place.

The district has traditionally redrawn the bus dividing line, exempting existing families when an imbalance in elementary school enrollment develops.  This time around the superintendent and board embarked into an exploration of modern elementary education theory, really rankling the community for a good 9 months.  In December they came to their senses and redrew the line, exempting existing families.

I think it's important to operate the district on some sort of principle of least surprise.  If there's a plan in place, there has to be a strong reason not to use it.  To do otherwise disrespects the people who bother to pay attention and plan according to advance notice the district provides.

I was told earlier the moderator and lawyer were unavailable for the Feb 6 snow date.  I don't know if was just bad planning with the lawyer.  You'd think the lawyer would assure they or a suitable substitute could make the snow date if necessary. The moderator is Richard Laughton, who is Shirley Thompson's (post) son in law. Shirley's memorial services include visiting hours Thursday, 6-8pm.  My deepest sympathy goes out to our moderator and Shirley's entire family.

New Hampshire law RSA40:3 allows for a pro tem moderator to be appointed if necessary.