On Wednesday August 21st the Oyster River school board voted to direct the superintendent to prepare a plan that addresses the imbalance between enrollment in Moharimet and Mast Way Elementary schools beginning in the 2014-2015 school year. The plan is to be presented at the October 16th school board meeting.

Children registered to start kindergarten at Moharimet this year will indeed attend Moharimet. The first day of school for kindergarten students in the district is this Thursday, August 29th. Grades 1 through 12 start a day earlier, Wednesday August 28th (school calendar). 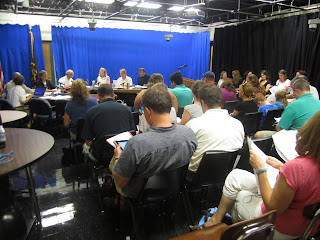 A plan proposed by the superintendent on July 17th to have all kindergarten students in the district attend Mast Way this school year was not acted upon by the board.  The hastily scheduled meeting was packed with kindergarten teachers and parents, almost all of whom were there to protest this proposed plan. Public comments were restricted to 90 seconds per person to accommodate the large crowd.  Many parents brought their children to the meeting.

The decision means that 410 students are expected to attend Moharimet this year.  The recent capacity study indicates Moharimet has a functional capacity of 388 students, so we appear to be over capacity.  However, the capacity study assumes 80 half-day K students, compared to the 57 currently registered, and does not include the two modular (temporary) classrooms that have been in use for the past two decades.  The capacity study further assumes classrooms will be on average filled at 90% of the maximum allowed by district policy, which allows 20 K students or 22 grade 1-4 students per room.

Here's my attempt to adjust the numbers to assess whether we are actually over capacity at Moharimet. I try to improve the method by looking at K and 1-4 separately.

The 90% factor takes into account that some classes will have fewer than 22 students, that some classrooms may be undersized and that 3-4 combination classrooms may not be filled to capacity.   It is still possible that the grades 1-4 can fit in the available space while staying within the district's class size policy.

At the meeting, Principal Harrington said he will handle any capacity problems, though he wasn't yet sure how.

The 306 students expected at Mast Way easily fit into its functional capacity of 369 students.  The superintendent expects that there will be two empty classrooms at Mast Way this year.

The parents were generally upset by the last minute nature of the proposed change to shift K students to Mast Way.  The superintendent put forth a credible defense, saying that he and the board have been working on the issue since March, that there have been several public meetings on the issue, and that it was the unexpected surge in enrollment over the summer which forced Moharimet over capacity and necessitated a prompt response.  He distributed copies of an impressive 26 page handout on the enrollment issue that he had quickly pulled together for the meeting.

Board member Newkirk voted against the motion directing the superintendent to produce a plan by October 16, saying he would prefer that multiple plans be presented so the board could choose among them.  Board member Turnbull, who had previously urged the superintendent to try to find a solution that could be implemented in time for the current school year, was not in attendance.

The board also voted to approve a one-year contract for a fifth grade teacher needed to accommodate an unexpected surge in enrollment there.  The superintendent assured us the money for the new teachers can be found in the budget approved by voters last March.

The board further voted to place a letter from the school's attorney in the public minutes.  Member Rotner voted no, saying he had not had sufficient time to consider the disclosure. As of this writing, the minutes have not year been posted, so the content of the letter is unknown.  It likely has to do with the recent Right-To-Know kerfuffle (scroll down).

It looks like the board is going to be asked to approve the Mast Way K plan at the recently added school board meeting tomorrow, August 21, 7pm.   You may recall the plan is to send all Kindergarten students to Mast Way, in order to equalize the enrollments at Mast Way and Mohariment.  According to a comment on Oyster River Community's Facebook page, staff has been informed that this is a reality for the upcoming school year, commencing next week.

The idea was first floated by the superintendent at the July 17 school board meeting.  I vaguely recall Principal Harrington being asked to call all K families.

The agenda for tomorrow's meeting has basically one item:

There's no mention that there is also expected to be a huge 9th grade class this year, around two hundred compared to usual 160 or so.  If our enrollment projections are wrong, we need to fix them before making decisions on tuitioning.

I have written about the elementary reconfiguration on a number of occasions (April 18, April 25, May 2, May 16, July 26.)  I found one reference to Board Member Turnbull asking the date for implementation be moved up from FY15 (school year starting August 2014) to FY14 (school starts next week).  I apologize to my readers for not realizing and emphasizing that this was coming so soon.

If you want to comment about the change before it's approved, show up at the school board meeting tomorrow (Wednesday) by 7pm.  Be on time -- public comments are at the beginning of the meeting.  (There are also comments at the end, but by then it will be too late.)

If you can't go (or even if you can), you may sent the board a note at orcsdsb@orcsd.org.  Please note that anything you send to that address will be a public document, and a paper copy will be placed in the public folder at the SAU office.

There's lots more to say about tuition based on the August 14 meeting, but I'm going to save that for another post.  Teaser: It looks like the Newmarket superintendent is trying to torpedo the deal. The meeting and fallout have been covered pretty well in the mainstream media (1 2 3).