At tonight's board meeting the superintendent announced that the district's "guaranteed maximum increase" on next year's health insurance premiums was 16.8%.  The guarantee is budget guidance from the insurance provider that the district receives every October.  The actual increase is determined in May (after the election), and sometimes comes in less, sometimes equal, but never exceeds the guarantee.

The 16.8% maximum increase is around $800,000, or 2% of our $41M budget.  The superintendent said he would present a plan that kept within the goal of a 3% operating budget increase at the Nov 5 budget workshop.

Actually it's probably less. Presumably the district had some percentage increase for health insurance in mind before this number came in.  I'll guess at least 5% ($240K, 0.6% of our budget), so they only have to come up with around $550,000 more for the field.  The Orchard Drive land sale, which was left out of the last plan, is probably good for at least $300,000, possibly more if Durham grants a variance.  It would require passing a more complicated ballot in March and the land sale actually closing to get the field.

Of course the superintendent and board would probably prefer to do some more budget shuffling to pull another rabbit out of the hat to find the money for the field while keeping to their recently passed goal (4.25%).   Genuine cuts in education so they get their field would be unseemly and I think unlikely.

Though it really didn't come out at the meeting, it seems like the field really won't go ahead if the taxpayers vote no on the one-time money (my issue last time).  This isn't because the board realized their error and found their respect for democracy -- it's more that the staging plan, where the field is built over a couple of years, is impractical as it keeps the fields out of commission for an entire school year.

In other news, I mentioned at public comment that in addition to the field, the board should let the voters weigh in on Full Day K.  They discussed this at the table, with the superintendent's position being that curriculum matters were the purview of the board and do not require an election day vote.  Member Howland said the small increase (which he called around $60,000 annually) didn't rise to the level of a warrant article.  (I think he may be lowballing the impact, but I can't find the number right now.  Back of the envelope: going from 7 half day K to 6 full day K classes is an increase of 2.5 full time equivalents which has to be way more than $60K.)  The superintendent said there would be a half-day option, but indicated there would be no transportation at midday.  This is all subject to change when the committee makes its recommendation in December.

It was a short meeting, so I'll keep this short.  Lee and Durham said YES to the solar power project, and ORCSD agreed to take the 10% excess power, so Moharimet will soon be partially solar powered.  The district passed the child restraint policy and had an interesting discussion of medical restraint.  On a sad note, Principal Allen and the board remembered Martin Brewer, a high school literature teacher who passed away last week, honoring him with a moment of silence.

Field to be built even if voters say no 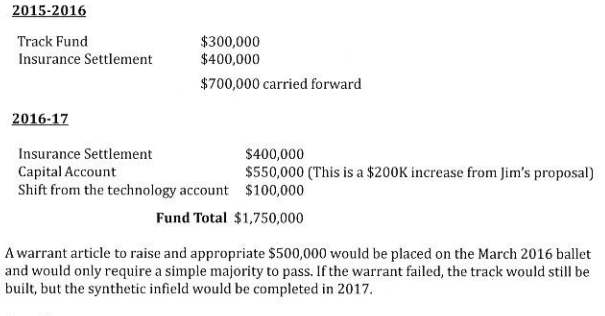 Last night the school board approved almost the correct financing plan for the $2.3M track and field project. Board Member Al Howland proposed a plan along the lines that I've been recommending: $800,000 from the LGC/HealthTrust settlement, the $300,000 track fund, $650,000 from delaying some capital and technology spending and $500,000 new from the taxpayers. Revenue from the Orchard Drive land sale is excluded from this plan, but could potentially reduce the amounts asked of the taxpayers and the capital fund.

Since the $500,000 warrant article is a one-time appropriation and not a bond, only 50% is required for passage on election day.  Four times in the past the field warrant has had over 50% voter support, but not the 60% required to pass the bond.

The main problem with the plan is that the district is planning to ignore the result of the vote and build the field no matter what!  It's right there in black and white: "If the warrant failed, the track would still be built."  To me this is completely unacceptable -- the field should be built if and only if a majority of voters approve it.  I believe a majority will, but if they're like me and told their vote doesn't count, they're going to get irate.

The seven member board, Superintendent Morse, Principal Allen and Athletic Director Parker spent around fifteen minutes discussing how to proceed if the voters vote NO.  Not one of them thought to say if the voters vote NO, we shouldn't build the field.  I was totally disappointed in all of them.

The school board still has time to change this detail of the plan.  I let them know how I felt with a public comment and an email.  You can email the board at orcsdsb@orcsd.org (which sometimes doesn't work) or email member Howland directly at ahowland@orcsd.org.  (Please be aware your email becomes a public document and goes in the public folder.  They black out your email address, so you don't have to worry about that.)

In related news, the board approved the new budget goal.   I'm happy to report that the board is including all recommended warrant articles and all revenue in the budget goal, like I've been proposing for a while now.   This year's goal is to cap the growth in the total asked of taxpayers to 4.25%.  While that number seems high, it is honest -- in past years stuff was excluded to make the number look smaller. For your money this year you get a new $2.3M field and full day Kindergarten, two long standing goals.  It's probably best to think of this as a 3% increase and a one-time ask of 1.25% ($500,000) for the field.  (As I'm sure the district will tell you over and over, there's no guarantee that your particular school taxes will go up exactly 4.25% as the details of apportionment and state aid can make this number vary between the three towns.)

The board approved the superintendent's plan to start the search immediately with the goal of hiring a
replacement assistant superintendent during the school year.  He ignored a proposal from last meeting to immediately promote an interim from within and start the search for permanent replacement to begin in July.  The superintendent made a remarkable claim that in his experience ("in 24 years of doing this work...") it doesn't matter if the hire is for mid-year or the beginning of the school year.  As I personally know candidates who are committed to their job and would not think of leaving their current district in the lurch, I find the superintendent's statement quite hard to swallow.  He backed it up with a real red herring about principals wanting to stay principals, further tattering his credibility.  Dr. Morse did say at the table (it wasn't in the written plan) that the search committee would consider applicants that wanted to start in July not January.

The superintendent and Principal Richard talked about the move toward "standards based reporting" where students' report cards will no longer have the traditional A to F grades but instead a number indicating progress toward each of a list of "competencies."  This is basically the way grades have been done in fifth grade and for a year or so there's been a process in the works to expand this to sixth grade math, and I think arts and music and phys ed too.  There was a lot of apologizing going on for not informing the public sooner and louder.  The intent is to eventually do this across the board, all classes, all grades.  Parents, start your griping now.  Little Timmy's got a 2 out of 3 in factoring polynomials, meaning he's progressing toward competency.  Explain that to Harvard.

The board also approved for first read a controversial policy allowing child restraint and seclusion.  First read means it's not yet adopted -- they need one more vote (second read) to do that.  The board adopted a controversial policy that gives sub-committees wider latitude to carry out their charge without board micromanagement.  David Taylor predicts bad consequences -- stay tuned.

There was also a discussion of air conditioning the third floor of the middle school, which was unbearably hot at the beginning of the school year.  The conclusion was that this was impractical due to high ceilings, high cost and high electrical load.