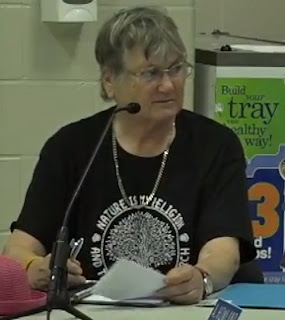 I haven't posted since around election day in March.  At first there wasn't any news to post about.  Then there was.

A month ago, on May 17th, 2017, Maria Barth resigned.  She was serving in her sixth year on the Oyster River School Board, the last year of her second term.  Before moving back to Oyster River, Maria served in Kittery government for 17 years, including 11 years as school board chair.

Ms. Barth stated at the end of the meeting:  "Today we have touched on two things that are extremely important to my values, namely religion and the constitution [...] and the second is the policy of [manifest] oversight, so with that I will offer my resignation."

The constitution/religion issue she was referring to was the question of a second school board meeting in September.  I believe it first came up at the May 3rd meeting.  Member Rotner announced that he couldn't attend because of the Jewish holiday Rosh Hashanah, New Years Day.  The superintendent suggested eliminating the meeting from the calendar, as typically that meeting isn't very busy as the bulk of work occurs before school opens and then in budget season, starting November or so.  Maria objected on constitutional grounds, saying now the board would then have to cancel meetings for any religious holiday.  She did not accept the argument that they would accommodate any board member's schedule regardless of reason in the same manner.

The manifest oversight refers to the review of the district checkbook before every school board meeting.  The current procedure requires a quorum of four members of the board to be present at 6:30 pm.  Then the meeting is officially opened, but the only business conducted is manifest review.  After the board approves the manifest the meeting is recessed until 7 pm, which is the regular start time for all other business.  The policy change was to have two members review the manifest instead of four, then the full board could approve the manifest based on the recommendation of the two.  Maria thought this to be an unacceptable abdication of oversight.

While I adore Maria and will continue to do so for the rest of my life, I am not very comfortable with her method of resigning.  Had she told the school board that she felt strongly enough about these issues that should would resign, the school board would almost certainly have acceded to her wishes. I do not understand why she chose to resign without giving the board the opportunity to change its mind first.

I also do not agree with her reasons.  I'm sympathetic to the argument that if they can, the board and leadership would defer to members' schedules regardless of the reason; there's no need to drag religion and the constitution into it.   As for oversight, I don't think anyone has ever found anything in a manifest review that wasn't going to its intended purpose from an approved budget line.  No one writes "illegal withdrawal" in the memo line of the checks.  For years the district hardly did manifest review at all, though I believe they are required by statute.  I think the system would operate at about the same level of oversight despite the workload reduction.

Regardless, I and everyone should thank Maria Barth for her incredible service over the past five years.  She was the voice of experience, taking over as Chairperson after the bad board had been twice found guilty of violating the Right-to-Know law and got trounced on election day in March, 2012. Chair Brackett and Member Kach were out and four new members, Maria, Ed Charle, Al Howland and Tom Newkirk, were in.

And then things went well.  They didn't have to go well.  The community was divided.  The budget was too high.  Seven administrative positions, including two superintendents, turned over in just a couple of years.  But Maria led with reason and calm, and the district continues to thrive today.

Maria was also the conscience of the district.  She would ferret out the underlying moral issues us lesser folks would let pass unnoticed.  She made us all better.  I will miss her guiding voice very much. 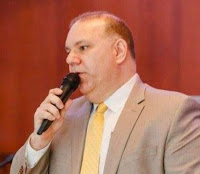 Maria was the Lee representative to the board.  (The board has four at-large seats and three town-specific seats).  The rules say if there were (I believe) two other Lee residents on the board, they (or the board as a whole, not sure) could choose the replacement to serve until the next election day.  That wasn't the case on the Oyster River board, so the decision fell to the Lee Select Board.  They appointed Brian Cisneros.

I don't know Mr. Cisneros.  He made a short opening statement at the June 7 board meeting: "Been in Lee since 2003.  Two kids in the school system.  One finishing up second grade going into third grade; started in the PEP program back when he was three.  My daughter is just finishing up eight grade and going on to the high school.  Been involved with special ed since second grade. So [I've] been very happy with the school system here and I'm very excited to be part of the program and join the team and be part of the successful plan you guys have."

According to the Internet, Mr. Cisneros is Director of Business Development for Navitance.  They appear to be a financial consulting firm for startups and non-profits; they offer interim CFOs among other services.


I wish Mr. Cisneros well for the remainder of his term and beyond.  We heard that three other Lee folks applied along with Brian.  I want to thank all of them personally; you all saved me from having to try to join the board.  Hopefully you'll volunteer again when the time comes.

I meant to mention that Tom Newkirk and Denise Day were reelected to their board leadership roles.   Furthermore, Hannah Jane Wilson was chosen as the student representative to the board.  The Wilsons have a bit of dynasty going; HJ's sister Caroline served as student rep two boards ago.

My daughter was one of nineteen studio orchestra students and ten chaperones to go to China in a hastily arranged trip.  The host was Chengdu University.  The original plan was for Portsmouth High to send 80 students to China in 2018 and Oyster River send 80 in 2019.  That's still the plan, but this recent trip was called a "pilot program" where up to twenty students were invited.  The students and several of the chaperones were heavily subsidized by the Chinese.

Dave Ervin and Jie Du first presented the possibility and got approval at the March 22nd school board meeting.  By six am the next morning students were lining up at the high school to sign up.  They flew to China on April 21st.  There they visited the cities of Chengdu, Xi'an and Beijing.  The group toured many famous sites including The Great Wall, Tienanmen Square, the Terracotta Army and a Panda Reserve.  They were all home June 2nd and back in school the next day.

In the four weeks of preparation, Mr. Ervin arranged and the students learned music to a silent movie, Buster Keaton's Sherlock Jr.   They had the opportunity to perform it four or five times in China, always to enthusiastic audiences.  Our students report they were generally treated like celebrities. Several times, after their performance the group was treated to performances by local students.

I missed Dennis Harrington's retirement party on Sunday, June 4. Reports are a good time was had by all.  The school board arranged to pay Principal Harrington part time for the summer to assure his participation in a smooth transition to Principal David Goldsmith.  So there's still plenty of time to stop in and say goodbye to a beloved principal who will be truly missed.

Unless there's a surprise in new registrations, it appears the 2017-2018 school year will have fewer students in attendance at Moharimet than Mast Way,  They're starting to joke about towing the modular classrooms to Lee. In all seriousness, the now full-day kindergarten and first grades are both at full capacity at Mast Way and additional registrants may be shifted to Moharimet wherever they live.  That's not definite; I think there's a multi-age classroom solution being considered as well.

After a couple of years of worrying about it when the problem got out of hand, the board voted in December 2013 to redraw district bus lines to shift students to Mast Way.  Moharimet had been overcrowded for a while, severely so for that last year (and the next).  At the time of the decision I predicted five years for the enrollments to even out; here we are in three.  I also warned that the last minute addition of the Wedgewood neighborhood to Mast Way might overcompensate, which may be what is happening.

The board has seen a couple of presentations of the Competency Reporting system being developed at the middle school.  Letter grades have been changed to a three tier scale for each "competency": Beginning, Progressing, and Meets.  There were tedious debates about adding "Exceeds" but that was decided against.

Competency grading has been in place in fifth grade for a while and recently expanded to sixth grade math.  The middle school is taking a big step along the path toward competency grading, with almost all 5, 6 and 7th grade classes using it exclusively next year I believe. High school will continue to use letter grades. Eighth grade will have both competencies and letter grades, a bit of micromanaging by the school board that I think is a good choice to aid the transition to high school.

In this example report from the current school year there are different meanings to the letters in the Habits of Learning section versus in the Competency section.  I believe that will be remedied in the coming year.


There's another board meeting Wednesday -- see you there.