Happy Election Day everyone.  Despite the nor'easter, election day went forward as scheduled in all three towns (Madbury postponed Town Meeting I think) and the results are in.  Total Oyster River ballots cast today reported at 1,099.  According to reelected moderator Richard Laughton, this is about 40% of a typical ORCSD election turnout. Incredibly, Lee results indicate at least 500 voters, while Durham reported only 385.  A little snow's not going to stop us voting here in Lee!  (Actually it hurt me not to vote, but I sat this one out.)

No surprises in the unofficial results, courtesy of Durham Friday Updates:

Al, Dan and Brian were all already serving on the board.  Congratulations to all of them on their election.

Article 3 - Shall the District approve the negotiated agreement with the Oyster River Bus Drivers?

Article 4 - Shall the District approve the negotiated agreement with the ORPaSS (paraprofessionals and support staff)?

Article 5 - Shall the district approve the proposed operating budget totaling $45,625,555?

Believe it or not, we got another nor'easter on Election Day.   Towns of Durham and Lee both say the polls are open, starting now, 7am!   No word from Madbury yet, which is scheduled to open its polls at 11 am.

This is my annual guide to the 2018 Oyster River School District election. I call it a biased guide because in addition to (I hope fairly) explaining each warrant article, I tell you how I'm going to vote, which is the biased part. It's a pretty uneventful school election this year, so I'll go over some news from the Deliberative Session first.

The Session went smoothly.  There was exactly zero discussion by the public on any of the warrant articles.  All will appear unchanged on Tuesday's ballot.

The meeting started with this year's Oyster River Distinguished Service Award being given to Brian Turnbull. Anybody who attends concerts at the schools often sees Brian up there playing upright bass and setting up and taking down chairs.  He was the main force behind getting a dedicated strings program at Oyster River, and he's been helping it along ever since, most recently by forming a booster organization for fundraising.  Congratulations, Brian.

I thought the most interesting thing at the meeting was Member Howland's discussion of the addition to Mast Way.  For the first time I can remember, the Mast Way enrollment has exceeded Moharimet's.  Just a few years ago Moharimet was terribly overcrowded.  The district reacted several ways: by adding dedicated cafeteria space to the Multipurpose Room, and by moving the dividing line between schools to shift students to Mast Way, which seems to have worked, perhaps too well.

The addition consists of four classrooms including a music room at the rear near the baseball field.  The budget on Tuesday's ballot includes $340 K for this work  There will also be work on the front entrance using a $500,000 state grant that's the result of a Homeland Security audit.

We Met the Candidates

Congratulations to existing school board members Brian Cisneros, Al Howland and Dan Klein. They are the current town-specific representatives from Lee, Durham and Madbury respectively.  As the only candidates for their respective seats, each is exceedingly likely to be elected to a new three year term on Tuesday.  It will be reelection for Al and Dan, and a first time election for Brian, who was appointed when Maria Barth resigned last year.

February13th Candidates Night had an usually large turnout, around fifteen members of the public. Usually it's just the candidates, the clerk, a cameraperson, a PTO parent with refreshments and me. This year no one recorded the meeting, in contrast to last year when there was a crew of four but no video ever appeared. So this year we've achieved the same result with much less effort.

I stuck my head in for the beginning and the end.  The discussion seemed to be centered on cell phone policy, which is up for review.  The candidates Brian, Al and Dan kept saying they probably wouldn't get it right the first time.  They needn't have been so wishy-washy.  The policy was changed a year or two ago and is back in play due to complaints so we're certain they didn't get it right the first time.

I missed Candidates Night because I was at the Strategic Planning Forum.  It was run by a couple of folks from NESDEC, the New England School Development Council.  I think these same folks ran it five years ago, and that meeting produced an awesome history of the district.

The meeting was pretty much a waste of time.  Each small group sat around the table making lists of strengths and weaknesses of the district.  At the end each of us listed our top five priorities on an oddly confusing bingo card provided by NESDEC.


Election day in Oyster River is this Tuesday, March 13th.  Hopefully unlike last year there will be no weather incidents that lead to the towns voting on different days. [I can hope but I'd be wrong.  Nonetheless polls are open in Lee and Durham (and probably in Madbury at 11 but no official confirmation yet).]   If you're a US citizen over 18 who lives in Lee, Madbury or Durham, you can just show up on Tuesday at your town's polling place and vote. Like almost all elections in New Hampshire, same day registration is available. So even if you've never voted or registered to vote in New Hampshire before, you can vote Tuesday. It's easier if everyone brings a state photo ID and if new registrants also bring proof of address (a utility bill), but under New Hampshire's voter ID law you can vote even if you don't bring those.

Your polling place and voting times depend on where you live:

As always, voters in each town are given identical school district ballots. Let's speed through the ballot questions, also known as the warrant articles.

Article 2 elects the school board members.  This year we have three candidates for the three town-specific seats, so they're all going to win. They happen to be existing board members Brian Cisneros, Al Howland and Dan Klein, so no changes there.  I don't think the teachers' guild even bothered with their usual questionnaire this year.  I haven't seen a single campaign sign. I probably still have ones for Al and Dan I should dig out.

Article 3 asks the district to approve the agreement with the Bus Drivers. The bus drivers got unionized this year, so negotiations took a long time and the drivers are getting substantial raises.  The salaries weren't too much of a sticking point during negotiations.  The district wanted to raise driver pay because of the current difficulty hiring and retaining drivers.  The numbers are the total increase in salary and benefits to be divided among all drivers each year.  I'm voting YES.

Article 4 ask the district to approve the agreement with ORPaSS, the paraprofessional and support staff bargaining unit.  These folks have been on a bit of a roller coaster, taking small raises six years ago in the wake of the Great Recession, then getting large raises three years ago.  This is return to a more typical raise.  I'm voting YES.

Article 5 is the main budget. Over the last few years the state has reworded this boilerplate to make more sense. We see the default budget is only $70,000 less than the full $45.6M budget.  That means if NO wins (and there's no subsequent vote) and we get the default budget, the taxpayers save 0.15%, fifteen dollars off a ten thousand dollar tax bill, essentially no difference.

The district budget goal was to stay within a 3.25% tax impact, which they did.  Unfortunately the impact is unevenly distributed throughout the towns.    Member Howland included this slide in his presentation at Deliberative Session. 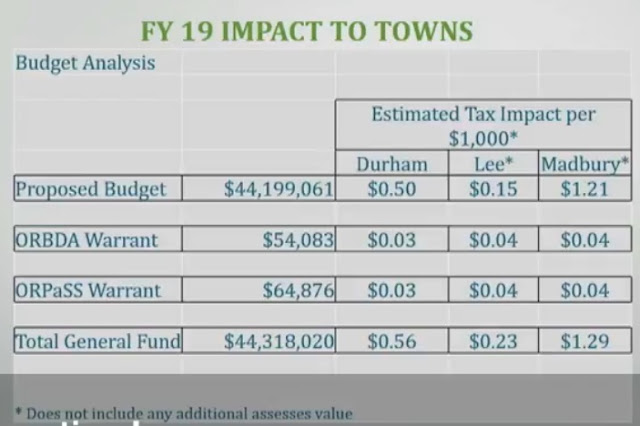 What jumps out is Madbury's millage increasing substantially more than the other towns.  Madbury is losing students, so should be expected to pay less of the share of district costs.  (The apportionment formula splits the bill in two, and bills the towns half in proportion to property values, half in proportion to number of students.)  Member Howland attempted to explain this as some difference in timing as to when the state calculates its aid to towns versus when we sample the numbers for apportionment purposes. I think that means we should see the opposite next year.   It wasn't particularly clear so I hope to look into it more.  In the meantime, I'm happy to live in Lee.  I'm voting YES.

See everybody at the polls.