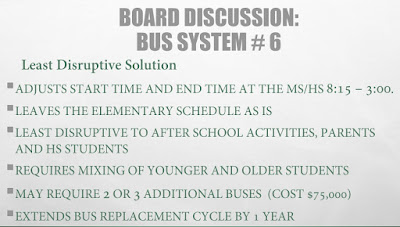 Chairman Newkirk has put the Start Time plan vote on the agenda for the upcoming meeting, this Wednesday, November 2, 2016, ORHS library, 7 pm. The board has asked the student representative to survey high school students and report.

The cost of the proposed plan is $75,000 annually, a 0.2% increase to the budget. This is the cost for additional bus drivers, needed because elementary and MS/HS students will be bused simultaneously in the afternoon and closer together in the morning.  Even though additional buses cost $80,000 each, the two or three required will be obtained theoretically without budget impact by extending the life of each bus in the fleet from 10 years to 11 years. Next year we'd buy new buses like we always do, but we'd keep the oldest buses another year instead of the usual replacement.

The main virtues of this plan are: Elementary school times are left unchanged.  Older kids still get home in time to care for younger kids.  The 3 pm end time still allows for afterschool activities. The cost, while not zero, is minimal.  The district maintains its 40 minute maximum time per bus ride (but has clarified this does not include the time after school waiting to board.) The new field and lights are there to extend the sports day.

I favor a plan that swaps the elementary and older starts and lengthens the elementary day by fifteen minutes. (Elem 7:45 - 2:25 MS/HS 8:45 - 3:45). This plan accords with the very clear consensus of the researchers that an 8:30 or later start is best.  It doesn't cost anything in additional buses or drivers.  But it does push the end of school to 3:45, which seems very late to athletes and overachievers.  I'm most sympathetic to the criticism that the older kids would no longer be home in time to monitor the younger ones.

The shortening of the school day irks me the most.  I didn't know there was time to spare.  It's a reduction of 3.6%.  It's the equivalent of six and a half days of school per year off the calendar.

If the board wanted to meet the 8:30 guidelines, or just add back the time lost, they could add days to the calendar.  Each day added is equivalent to about 2 minutes and 20 seconds per day.  So we could start later and/or end earlier at the cost of more school days.  The contract currently limits teachers to 185 days, so this probably only a longer term solution.

The board has surveyed teachers twice and has gotten parent and community input through the forum and letters.  It will hear a report on a survey of high school students before it makes its decision.  While the the board has made a point to solicit input widely, I think it's unlikely the plan will change as a result.  I think there's a better than even chance the board will pass this plan unchanged on Wednesday.  Also possible is a delay of a meeting or two to gather more input.

It probably seems to the board and other folks that have been paying attention that the issue has dragged on for a long time.  I first posted in April, 2014 that it was among the board's goals   But I think the reality for most people is that they've only recently become aware that something may change, and they don't know the details.  The board's plan has only been public for not quite three weeks at this point. By calling it "Bus System #6" they're not really making it clear that this is the one.  I don't really see why the decision needs to made right now to get done in time for September, 2017, but I suppose I prefer that to the board's usual waffling.

I should mention the main misconception, repeated in the parent forum, and really not adequately addressed in the powerpoint.  Parents repeatedly voiced that it was a matter of discipline, limiting screens at night and getting to bed early.  While proper sleep hygiene is very important, and caffeine must be regulated, this is not just a question of parenting. It's not just that adolescents need more sleep, which they do.  It's that their natural sleep time is shifted later. There's not much point teaching them too early in the morning because their minds are not yet awake.  Obviously this doesn't apply to everyone, but it represents the norm as determined by researchers.

So I support the compromise, even though I'd prefer a solution that achieves the research consensus of 8:30 or later, with no loss of school time, perhaps by adding days to the calendar.

It occurs to me no one's discussed the ubiquity of prescribed stimulants, Vyvanse, Adderall, Ritalin and the rest.  I would imagine the aggregate effect on adolescent sleep could be quite large.

We should survey students and parents to get some "before" data.  Let's remember to ask about stimulants, both prescription and caffeinated.

Back in March I wrote these notes about the issue, which I don't think I ever posted here except in summary but may be of interest.


[Edit: this passed as expected.]

For months I've neglected to mention that Dennis Harrington is retiring from Principal of Moharimet at the end of this school year.  He's been principal there forever, having been an educator for 55 years.  He recently achieved his longtime goals of a Moharimet cafeteria and full day Kindergarten, so I guess it's a good time to go. Congratulations, Dennis.  The search for a replacement is underway.  I'm sure I'll write more when the time comes.