The only real news to emerge from the budget hearing (video) is football is back. On January 10 at 3pm, two hours before the deadline, a citizen petition was submitted. The requisite twenty-five signatures were deemed valid, so this will appear on the ballot in March, subject to amendments at Deliberative Session:

Shall the district establish a football program at the Oyster River High School with the object of moving toward a varsity team in coordination with the rules and regulations of the New Hampshire Interscholastic Athletic Association (NHIAA)? Budgeted start-up costs of $34,000 include; $15,000 raised by a community based "booster" club, $5,000 contribution from the school district and the balance of approximately $14,000 paid by the players (larger number of players lower cost per player) at 35 players it would be $400 per player

I've endeavored to render the shaky punctuation and grammar faithfully; please click on the inset to see the original.  I presume the district is required to present it at the deliberative session without editing.

The article asks taxpayers for $5,000 of the claimed $34,000 "start-up costs" of football.  The rest is about equally divided between player fees and fundraising.  This looks very similar to the plan rejected by the board a few years ago.  The board also rejected a football coop with Portsmouth High last year.

My understanding of the rules is that a single year request requires only a simple majority, while a multiyear commitment needs 60% for passage.  It's not totally clear, but I assume this is meant to be a one year request.  If passed, the fate of the program is undetermined beyond that.  The board could decide to add it permanently; if not the boosters can get another warrant on the ballot next year and leave it again to the voters. Presumably eventually the board would go along making annual votes unnecessary.

I'm not going to take a position now, but I will remind folks why this failed a few years ago.

First, there was a terrible proposed contract with ORYA that required the district to refund startup costs if they ever even considered ending the program.  There's nothing that mentions the ORYA in this warrant, so presumably they're out of the loop and the district is on its own.  That's probably an improvement over the awful contract.

Second, last time, as here, the budget neglected trainers, about $10 K per year, startup costs, and Title IX, which requires us to have as much girls athletics as boys athletics.  Partly the problem was the costs themselves, and partly it was that the "football is free to the taxpayers" hype felt like a deception after the truth came out.  At last night's school board meeting, Athletic Director Parker thought a more realistic budget was $64K first year costs, $37K annual costs years two through five, excluding Title IX concerns.

Third, the Title IX concerns weighed heavily. The district has to be extra careful about Title IX as they are under extra scrutiny due to a lawsuit a few years ago.   If 35 boys sign up for football, 35 opportunities for girls athletics have to be created.  I should be clearer: 35 additional athletic slots need to be actually filled by girls.  To the extent girls sign up for football or boys substitute football for another sport, that number is lessened.  The district could also choose to reduce the opportunities for boys in other sports.  The law allows a plus or minus 3 percent discrepancy, which may save us a few more slots.

Fourth, there were concerns for the health of the players in light of the growing awareness of the risk of concussion and other brain injury.

Fifth there were concerns about the effect on academics and school culture.

The board voted unanimously to not recommend this article be passed.  According to the law, even if passed the board can read this article as "blah blah blah $5,000 blah blah blah," stick the cash in the operating fund and never implement football. Their discussion around their unanimous dis-endorsement indicates to me that that is likely.

In the interest of having the voters vote on an article that the board might actually implement if passed, I've drafted the following. Please feel free to offer it as an amendment at Deliberative Session Feb 7.  Unfortunately I'll be out of town that night.

Shall the District raise and appropriate $50,000 to establish a football program commencing fall 2017 at the Oyster River High School in accordance with board policy and New Hampshire Interscholastic Athletic Association regulations?  Budgeted first year costs of $79,000 cover equipment, trainers, transportation, field and lights operation and maintenance, need-based fee relief, increased storage,  Title IX compliance and more.  Offsetting revenue includes $15,000 raised by a community-based booster club and $14,000 in players fees. Annual costs in subsequent years are expected to be $27,000 less than the first year, offset by boosters and player fees; however this article only asks for the first year of funding.   At the discretion of the board, in the event that fewer than 30 players have not signed up or less than $15,000 has been contributed by Sept, 2017, the football program shall not be established.

In addition to the school board and the administrative staff, three members of the public showed up at last Wednesday's budget hearing, including yours truly.  There was an older woman there that said she was at the meeting in the sixties when the budget first went over a million dollars.  That's less than this year's increase (though not so in inflation-adjusted terms).

The superintendent briefly presented the budget, which he said would have an increase in impact of 3.14%, around $1.3M.  That's the total increase we're asking of the taxpayers and state aid to towns.  It falls unequally on the three towns, with Durham's local school tax rate increasing over 4% while Madbury's is decreasing by 0.6%.  The town percentages are preliminary estimates by Business Administrator Caswell.  They're not particularly accurate, as the inputs are not truly known until summer. 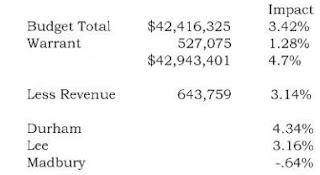 The reason for the variations between towns is the apportionment formula.  The fraction of students in a town and the fraction of property in a town together determine the town's share of the school budget.   The state aid to towns varies as well.

The default budget, essentially what we get if the voters vote NO on the budget, is $150K higher than the proposed budget.  The default budget by law honors existing contracts but admits no new spending and no repeat of one-time expenditures from the previous year.   So, despite the 3% increase, the higher default budget is an indication the board kept things reasonably tight this cycle.

The board is drawing on $240K of reserves for the new budget.  If the voters go along, they will be adding $200K to the reserves from this year, so it's kind of a wash.  If the taxpayers say no, they get to save the money as the reserves will be drawn upon and not replenished.

The board did add several positions deemed a priority.  $55K was allocated for a second nurse at the high school.  We've let the current nurse handle more than double the usual load for a high school nurse.  Due to the influx of special ed students (see below) the nursing work is expected to significantly increase next year.

The high school also got an additional person in the counseling office to coordinate extended learning opportunities outside of the building.  This includes vocational offerings, classes at UNH, internships and online courses, VLACS.   You can take Phys Ed online!  The board felt the past and hopefully future growth in outside learning opportunities warranted a dedicated staff member.

In addition, a part time position has been made full time to accommodate the increase in students at the high school.   This is partly an increase of tuition students, and partly an increase in local students.  Despite years of dire warnings from the Long Term Planning Committee about a reduction in enrollment, we're seeing the opposite.

We're seeing an increase in special education students, with Director Plourde reporting 11 new students requiring one on one aids or nursing next year or expensive out-of-district placement.  The special ed budget increased $500K to handle the increased load.

There's lots more but this is getting long, so I'll post.