[Edit: Board member Williams tells me the middle school money will be spent over two years.]

The public hearing on the ORCSD budget and middle school bond was last Wednesday, January 15. The warrant has three major articles: the middle school project, the teacher's guild contract and the operating budget for the next school year, FY21.

The warrant is subject to amendment at Deliberative Session on Tuesday February 4, 7pm ORHS, and to approval by the voters on municipal election day, Tuesday March 10, 2020 at your town's polling place.  You'll already know where it is and be registered if you vote in the presidential primary on February 11.

Article 3 is the 25 year middle school bond, principal $49.85M, call it $50M.  There's some creative financing going on as the district is asking for $625K for the first year's debt service.  The level debt plan they chose (constant interest+principal payment, like a typical mortgage) would have a typical annual cost of $2.6M (at 2.15%) but there have been moves to keep the debt service from growing too fast.  The high school bond is paid off in the 23-24 school year and I think our share of the service on that is about 35% of the expected service on the middle school bond.  The government aid on the high school bond is not available for the middle school bond.  Article 3 requires a 60% supermajority to pass.

Article 5 is the teachers' contract, asking for collective raises of $627K in FY21, $772K in FY22 and about $700K in each of the following three years.  It seems like this is a five year contract -- I thought the usual practice was a three year contract so I need to check up on this. [Edit:  Yes, this is the first five year contract.]  I think I heard the superintendent say this was a 3% raise, which would be historically large, in exchange for concessions on health care, namely an optional high-deductible plan.  I'd check the percentage myself but I couldn't find the denominator, the total spent on guild members.  If $772K is 3% that implies the guild is $27M out of $48M, 56% of the budget.

I'm always on the lookout for a meeting or a show to attend, so I accidentally wandered into a guild meeting in the ORHS auditorium, maybe the day before the first day of school in late August. They ushered me out about the time I realized what it was. Sorry about that, teachers' guild.

Article 4 is the usual budget, asking voters for $47.5M.  The default budget, what we get if NO wins, is $700K higher.  So this budget should pass easily.  Do the usual naysayers vote NO in this case?  Only the ones who can't understand the question as written or the truly ornery, I suppose. The board kept things tight this year, and plans to for the next few years, so the middle school won't cause a large tax spike, just the usual annoying 3.25%. It's out of the board's control how the increase is spread among the towns.

The expected tax rise if all the warrant articles pass, including the middle school, teachers contract and district budget, is 0.3% in Lee (a 7 cent predicted increase on the millage), 2.0% in Madbury (+44 cents)  and 3.2% in Durham (+57 cents).  This doesn't account for the new assessments which come out in October.  I believe Durham expanded its tax base last year so I expect the millage will not increase quite as much as predicted here, though the lack of an asterisk gives me pause. 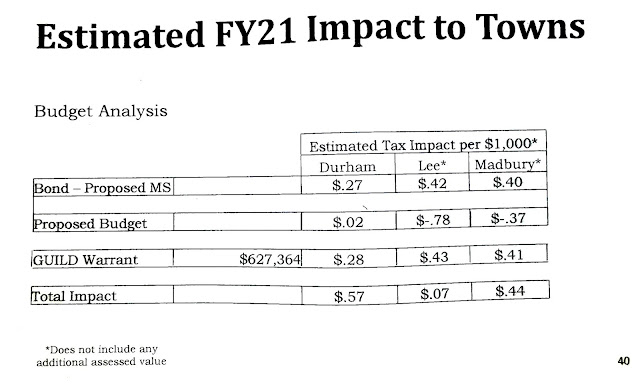 The new middle school project has a great web page full of all sorts of information on the project.  According to the superintendent the district itself isn't allowed to campaign for the new school directly.  The superintendent has been attending informational dinners hosted by Oyster River residents where he presents the plan, presumably without any cajoling.

There's been a citizen committee formed, Go Vote ORMS, which will directly advocate.  I've been too busy to join but I do get their emails.  They seem like they're doing great stuff.  Around town I personally haven't really noticed much.  Presumably their efforts will become more visible as the voting date approaches.

The $50M bond doesn't include the $800K spent this year on planning, mainly with architectural firm Lavallee Brensinger.  Everyone understands that getting 60% of the voters to agree on the bond is a challenge, so much of the effort involves bringing the public along.  There are a series of pretty postcards on various aspects of the project.  The architects have also produced video fly-through animations, which are much easier to digest than architectural drawings. The people in the video are all frozen in place like statues. They're fine, just a bit shocked by the price tag.

Like everybody else I'd prefer not to pay for a new school, but it does seem like the old middle has outlived its useful life. It's a shame that the newer parts of the old building can't be repurposed (the gym area was built in 1996), say as a Durham Community Center, but space and safety considerations have nixed that idea.

There doesn't seem to be anything to be gained by waiting, as maintenance costs on the old building and construction costs on the new one will only increase.  Currently municipal bond interest rates are really low, the most recent issues at 2.15%. I suppose we could try to hold out for some federal or state building aid, but there's no particular reason to believe any of that is forthcoming anytime soon. So I strongly believe a YES vote on March 10, 2020 is in the best interests of the district and its taxpayers.

The Deliberate Session is February 4th, 7pm in the ORHS auditorium.  I can't emphasize enough that this is a real election. A majority of voters at the Deliberative Session can amend the existing warrant articles (also known as the ballot questions). The voters then vote on the amended articles on March 11th.

You must be eligible to vote in one of the three towns to be given a voting card at the DS. Sometimes but not always there's been same-day registration at the DS. So if you can legally vote in any of the three towns (i.e. you're a US citizen at least 18 who lives in the district) you can show up at the DS, (maybe) register if needed, and vote. It's best to show ID (and proof of address like a utility bill if you need to register), but if you're willing to sign an affidavit you don't have to.

You might want to register to vote now if you want to participate.  Many of you will want to vote in the presidential primary on February 11 anyway.  Same day registration will definitely be available in the primary, but it's best to avoid the long line by registering ahead of time.

Hardly anyone shows up at DS, usually between 50 and 120 voters. So you and your majority of 25 may rewrite the budget. Or stop it from being rewritten. A few years ago the football question got mangled at Deliberative Session which complicated the discussion the following year.

The law says warrant articles cannot be amended to eliminate the subject matter.  For a long time the accepted rule was that the wording on ballot questions could not be changed at DS, only certain dollar amounts. But a court ruling a few years ago now allows for broader changes.  It's usually just as easy to change dollar amounts for the same effect, potentially avoiding legal challenge.  For example if the middle school bond amount is amended to $50,000 instead of $50,000,000 that effectively kills the middle school project for this year because passed or not, a school can't be built for $50,000.

There are certain parts of the warrant prescribed by law (including the default budget and negotiated contracts) which cannot be amended at DS.  So besides the middle school bond, only the district operating budget may be amended.  Since it's already $700K below the default budget, it's not clear what amendment to make.  If some anti-tax folks successfully lower it even further, there would probably be a campaign to get the voters to support the district by voting NO.  We'd be taxed an extra $700K but the district probably would stick to its plan and that $700K wouldn't be spent, ending up in the year end fund balance and returned to the taxpayers the next year, in the form of a lower tax bill.

Unlike the past few years, I won't be traveling and I'll be able to attend DS this year.  See everybody there!