Two weeks to the School Board Election 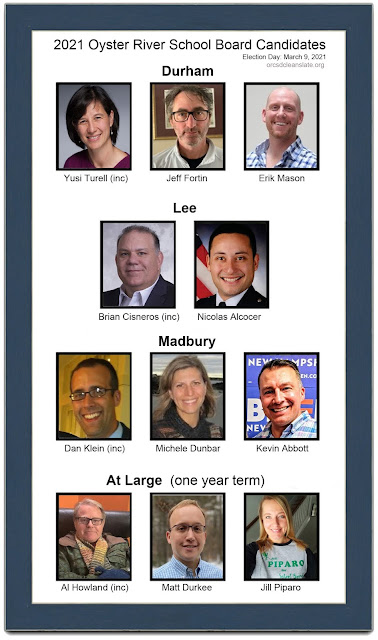 It's an exciting school board election this year in Oyster River. In about half of the years it's two races with only the incumbents running, snooze.  This year on the ballot we have eleven candidates, for four school board seats. (Maybe ten now, there's a rumor someone dropped out, see below.)

There's a glut of information on the races; I'll guide you through all that before I give you my picks.  I'm going to keep it unbiased until then; please skip to the end if you just want to know who I'm voting for.

Let's start with some background before we get to the candidates. The Oyster River School Board has seven members: three town-specific seats (one for each of Durham, Lee and Madbury) and four at-large seats.  To run for a town specific seat, you must reside in that town. Any eligible voter in any of the three towns can run for the at-large seats.

The seats all have three year terms. But this year the winner of the At-Large seat only wins a one year term.  That's the remainder of Dr. Kenny Rotner's term.  Kenny sadly passed away last summer; Yusi Turell was appointed by the board to serve the five or six months until election day.

The important thing for voters to know is: Every Oyster River voter can vote in all four races. I'll say it again: Every voter can choose a candidate for each of all four seats.  The school district ballot is the same in all three towns.  You don't need to live in Lee to vote for the Lee representative to the school board.

Election Day is Tuesday March 9, 2021.  Eligible citizens in the three towns can vote a school district ballot.  Vote at your local town polling place like any other election.  It's best to register ahead of time if you're not already registered, but same day registration is available.  It's best to bring ID, and if you need to register, proof of address like a utility bill, but you can still vote even if you don't bring these by signing an affidavit they'll give you.

Generally polls are open in Lee and Durham from 7 am to 7 pm with Madbury open from 11 am to 7 pm (that's an edit; I had 7:30 before; the shortened hours are a change).  This year due to the pandemic there are changes; Lee is doing Drive Through Voting at the Lee Transfer Station. Here are some useful town links:

Oyster River is an SB2 district, which means that the election is split into two parts. The draft ballot is produced by the school district, plus any citizen articles added by petition. The first part of the election is the Deliberative Session (this year's was on February 2) where the voters meet to amend the ballot questions.  The Deliberate Session is the vestige of New England Town Meeting, where a majority of voters at the session can change the ballot, subject to restrictions.  This year, like most, the ballot was unchanged at Deliberative Session.  Our focus here is the second part of the election, Election Day March 9, when each question is voted on by the citizenry.

Like I've mentioned, there is already a lot of information out about the candidates. In fact, you don't really need me, the Moharimet and Mast Way PTOs are running a facebook page:

Each candidate had the opportunity to complete a bio and two questionnaires.

The Candidates on the Web

Most candidates have set up facebook pages for their candidacies.  Some have advertised they're available for meetings via Zoom.  Let's go through the races, and link each candidates name to their facebook page and other web presences I can find.

The three candidates for the Durham school board seat are Yusi Turell (facebook, web),  Jeff Fortin (facebook)  and Eric Mason (no candidacy site known to me but he's CEO of RYSE Marketing & Communications). Ms. Turell is essentially the incumbent; she currently holds an at-large seat.

The two candidates for the Lee school board seat are the incumbent Brian Cisneros (facebook) and Nicolas Alcocer (facebook).  I thought there were three Lee candidates, but this third name I scribbled on some paper in January, Debra Cavanaugh, seems to have been a figment of my imagination.

The three candidates for the Madbury school board seat are the incumbent Dan Klein (no site found),  Michelle Dunbar (facebook) and Kevin Abbott (facebook, web).  I saw posted on the PTO's information site on 2/22 that Mr. Abbott had dropped out, but his facebook and website don't mention anything about it, and he's probably on the ballot no matter what he does.

The three candidates for the At-Large seat with a one year term are Al Howland (web), Matt Durkee (facebook) and Jill Piparo  (facebook).   Let's call Al Howland the incumbent; he's served in the Durham seat since 2012 though this time he's seeking the one-year at-large seat.

Good morning everyone. Sadly I am not able to seek the seat for School Board representing Madbury any longer. That being said, my name will still be on the ballot because they are already at the Town Halls.

There seems to be a lot of confusion with regards to the "officially withdrawn" question. There is no way at this point to do that. If by some chance after telling every person I can that I'm not running, I happen to win the seat, I will be forced to resign.

All of this is due to deeply personal reasons. So, with all due respect, this is all of the information I am sharing at this time.

Thank you for the opportunity to do this. Good luck to the remaining candidates.

Regretfully, I am writing to withdraw my candidacy for the ORCSD School Board. Work related responsibilities will be increasing in the next few months as I help guide our College through the development of a new Strategic Plan and a two-year long accreditation process. Previously I believed I would be relieved of some current administrative work in order to provide public service on the School Board. This is no longer the case. I apologize to my supporters, but it is beyond my control.
I am disappointed in being unable to collaborate with faculty and staff to support and enhance the district’s already strong programs in technology, equity, student mental health, and LGBTQ+ inclusion. I believe it is better to leave this important work to others if I am unable to devote proper time to the position.
I have received overwhelming support for my candidacy for which I thank you all.
]

Candidates night was supposed to be last Tuesday, 2/23, but with all the candidates and the pandemic it was changed to be over two nights next week.

The meetings are fully virtual; check out the facebook links for more detail.